Yosemite National Park has to be one of the most beautiful places on this planet.  Everywhere you turn in the valley there are gorgeous views of massive rock formations, waterfalls, forests and pastoral meadows.  There are 3 groves of Giant Sequoia trees, the largest living things on earth.  Yosemite is THE place where the whole worldwide concept of National Parks and perpetual preservation started.  It was set aside years before Yellowstone largely due to the efforts of Muir and the first ranger, Galen Clark.  If you’ve never been there, put it on your list. 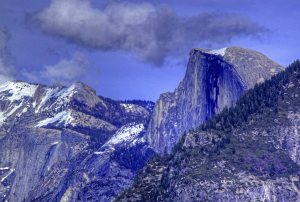 Campgrounds in the park are almost always full.  Reservations are made many months in advance.  We stayed in a small RV park near Coulterville about 30 miles from the park.  Coulterville is an interesting foothills town on John Muir’s original trail to Yosemite Valley and the route of the first road to the park.  It is largely undeveloped now as other routes have become more popular.

Most of the 49er Gold Rush history is located in the Sierra Nevada foothills.  We visited the towns of Chinese Camp, Fish Camp, Mariposa, Angels Camp, Sonora, Columbia, Jamestown and  Murphys.  Each has a story to tell.  Columbia is preserved as a California Historic State Park.  Jamestown has a great steam train, roundhouse and turntable within Railtown 1897 State Historic Park.  Fish Camp has the Yosemite Mountain and Sugar Pine RR.  Its a fine train ride pulled by an historic Shay geared locomotive.  We found good sized crowds at all these historic trains in California.

3 Responses to Yosemite and Gold Country