Reminds me of something

South Carolina’s Low Country is a great place to visit.  We had a limited time so we had to make the best of it.  Magnolia Plantation was spectacular when we visited during the peak week of azaleas.  Riotous color everywhere.  Charle Kuralt called Magnolia his greatest Charleston pleasure.  The gardens saved the plantation when they were opened to tourists in the late 19th century.  The Drayton family has called Magnolia home since 1676.

Anybody know his name? 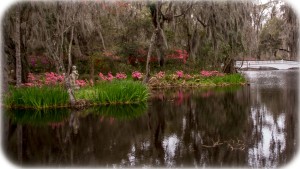 The gardens of Magnolia

Cac Caw Nature Preserve is a county park near Charleston.  A former rice plantation, the preserve is now half history and half nature park.  There are 11 different habitats for wildlife many of which would not exist without the rice plantation period.  We hiked 7 miles of trails and saw eagles, ospreys, herons, egrets and alligators. 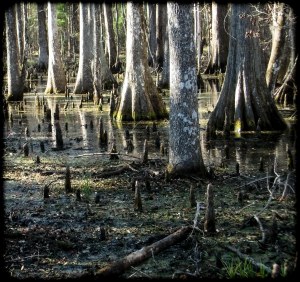 Frampton Planation is now a visitor center.  The family dates from the antebellum period and still live in the area.  The 300 year old oaks are a trademark of South Carolina.

On our way to the Orangeburg Elks we visited the little town of Branchville SC.  Branchville is a very historic railroad town.  In 1833 the longest railroad in the world ran (133 miles) from Charleston through Branchville to Hamburg SC.  Soon Branchville was the very first rail junction in the US when a line was built to Orangeburg!  The very first railroad restaurant was established in the depot here!  So naturally we had to check it out and sample the local cuisine.  The Elks provided a nice spot for the night.