Our journey across the plains took us the length of Iowa.  Endless farmfields of newly planted or awaiting corn.  The area had recently had a tremendous amount of rain and rivers and creeks were full, many farms still muddy.  The rolling countryside reminded us of large ocean swells going on forever.

Council Bluffs had been on our list for a while as the home of the Union Pacific Museum and a huge collection of Transcontinental Railroad history.  It was here that President Lincoln chose the site where the railroad would begin.  The Union Pacific began building West while the Central Pacific built East from Sacramento California.  The Union Pacific Museum is housed in a Carnegie Library building in downtown Council Bluffs.  The museum is supported by donations and the staff are friendly.  The museum tells the story of the UP throughout its history.  There are great displays of the Transcontinental Railroad as well as UP Streamliners, the Challenger Passenger train and even AMTRAK.  There are displays utilizing all kinds of media including historic steriopticons,  in character video, multi screen video and diesel cab simulator. 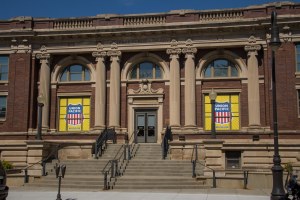 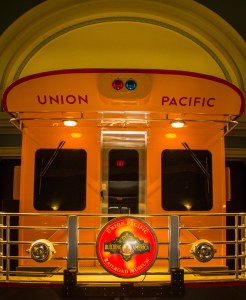 Another prime attraction in Council Bluffs is the Grenville M. Dodge Mansion.  Built in 1869, the home of the Union Pacific’s Chief Engineer for the Transcontinental project. Dodge had been a very succesful Union General in the Civil War and his military talents helped him to great success executing the railroad.  The home was built at the astronomical cost of $35,000 and had electric and gas lighting and indoor plumbing.  The home has been beautifully restored by the city and volunteers gave us a marvelous tour. Dodge was a master of railroad design and construction and went on to build railroads in France and Russia.  While there we saw huge wild turkeys running wild through town. Our docents told us turkeys and deer are a big problem in the city. 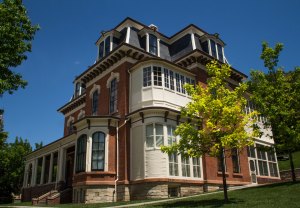 Council Bluffs was also the location of the first meeting between Lewis and Clark and Native Americans under the council tree on their trek west in 1804.

The view today from the council bluff

We enjoyed our stay at the Omaha Elks lodge but we weren’t impressed with drivers in town.  Red light running seems to be a pastime there.  Crazy!