A major goal in planning our travels this Summer was the An Ri Ra Irish Festival in Butte Montana.  We attended the fest in 2010 while workamping in Livingston MT after learning that our favorite Irish Rock band, The Prodigals, would be there.  We are fascinated by the rich ethnic and mining history of the area.  Butte’s Berkeley Pit is one of the largest Superfund sites in the EPA’s efforts to protect the community from mining’s toxic waste.   Butte has learned to celebrate its mining heritage and its World Museum of Mining sheds light on this often neglected realm of history.  Even today Butte has the highest percentage claiming Irish heritage of any city in the US.

In 2017 our friends the Prodigals were coming back to Butte and we could fit it into our travels.  Are we glad we did!  Butte has created a performance stage out of a historic mining headframe.  A beautiful lawn and an incredible view welcomes visitors.  Organizers and volunteers do a flawless job putting on a friendly classy event.  This year the festival was free with attendees urged to donate generously.  The crowd was so large we thought Butte’s entire population of 33,000 were all there.  Families from infants to 90 year olds showed up to see their daughters, sons and grandchildren perform Irish Dance.  All ages enjoyed musical acts from Butte, Ireland and New York City (The Prodigals). 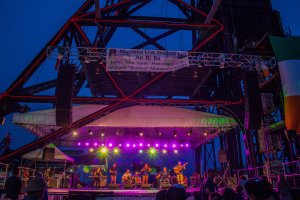 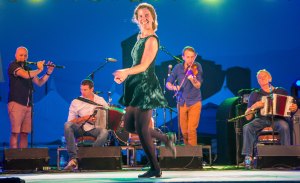 Dance is huge in Butte

Dianne, Randy and Andrew
at the Mining Museum

We love Butte and its history.  Its people are among the friendliest we’ve ever met.  We are sure to return again.