Steamtown has been on this railfan’s radar for many years.  It is impressive if you like historic locomotives and railroad history.

Steamtown is a railroad museum and heritage railroad built on the 62 acre site of the former Scranton Yards of the Delaware Lackawanna and Western Railroad.  The museum is built around a working turntable and roundhouse that are largely replications of the original DL&W structures.  There are also existing buildings from 1899 and 1902.  The museum’s shops fabricate parts for the locomotives and other equipment in the collection.  Baldwin 26 is a beautifully restored 0-6-0 steam locomotive in classic Baldwin green that pulls 2 passenger cars for tours of the yards.  They also have many other locomotives both steam and diesel.

Union Pacific 4-8-8-4 #4012 is known as the Big Boy and not operational but still very impressive as the largest steam locomotive ever built.  It is an articulated coal burning locomotive designed to haul heavy trains in mountains without helpers.  Big Boys could speed up to 80 mph but rarely went over 60.  They were the heaviest locos ever built. 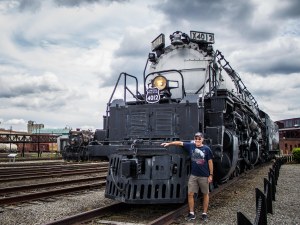 Union Pacific is restoring one in Cheyenne WY

The museum was begun by F. Nelson Blount, heir to the largest seafood processing company in the US.  He was an avid railfan and collector.  The museum started in VT and moved to Scranton where it was eventually taken over by the National Park Service.

The city of Scranton has a rich railroad history.  We visited the 1908 Beaux Arts railway station which has now been converted into a Radisson Hotel.  It has a beautiful interior including  stained glass and tile mosiac.  The Delaware Lackawanna and Western Railroad was also known as the DL&W or Lackawanna Railroad.  It was called The Antracite Route because the major commodity hauled was the hard coal of the region.  Hard coal burned cleaner and the railroad advertised this with the icon Phoebe Snow, whose white clothes remained clean on the Lackawanna.  There was also a top of the line passenger train called “The Phoebe Snow”. 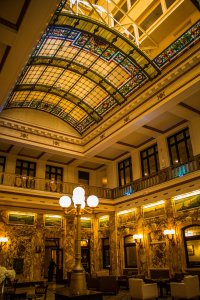 Adjacent to Steamtown is the Electric City Trolley Museum offered by the city.  Scranton had the very first all electric trolleys in America, hence its nickname, The Electric City.  Unfortunately, its hours were short and steamtown was too big.  Next time.

Scranton had first all electric trolley in US