While staying at Thousand Trails Peace River RV Park we visited two state parks we had driven by countless times.  While we lived in southern Florida and toured much of the state, we were always in a hurry.  We never took the time to visit some of the lesser known parks.  Too busy with home, work, whatever.  Now in the RV lifestyle we have the time to explore.

Highlands Hammock is a true hardwood hammock just west of Sebring FL.  It has several hiking trails including a nice boardwalk thru a cypress swamp.  The park opened in 1931 and still offers a CCC museum.  Some trees are believed to be over 1000 years old.  Orange trees from the original settlers are over 20 feet tall.  There is an oak tree believed to be the largest in Florida with a girth of 36 feet.  Nice day trip. 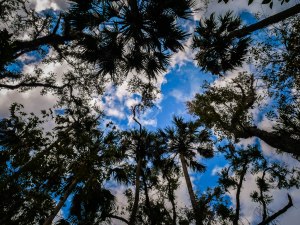 Payne’s Creek Preserve Historic State Park is just east of the little town of Bowling Green FL.  After the Second Seminole War trading posts were established along the frontier between white settlers and the Seminole.  Many were built by Kennedy and Darling.  When whites persisted in moving south into Indian territory some renegade Seminoles attacked the store killing the propietors and burning the post.  While Chief Billy Bowlegs vowed he would punish those responsible whites blamed all Indians.  Forts were built across the frontier.  The fort along Payne’s Creek was called Ft. Choconikla and was abandoned after only a year due to the disease carrying mosquitos in the area.  It is a very quiet park preserving the site of the Payne’s Creek massacre in 1849 that was a major spark igniting the Third Seminole War. 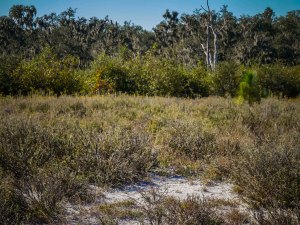 One of our great pleasures in full-time RVing is the opportunity to visit the lesser known parks and historic sites.  In this age of overcrowding it’s a treat to find these quiet places.