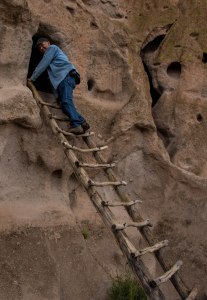 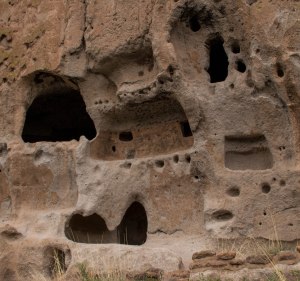 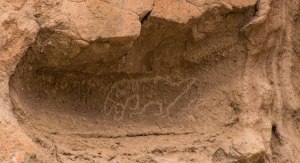 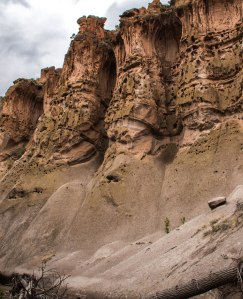 Ever since our first trip West when our kids were young, we have always been fascinated by ancestral Puebloan sites in the American Southwest.  Bandelier has been on our radar for a long time.

On our way from train watching in Vaughn NM to Durango CO we RV camped at the Elks Lodge in Los Alamos.  Bandelier was conveniently just outside the National Lab boundary.

Los Alamos itself is a very interesting city.  Lots of history with the lab there and, of course, The Manhatten Project.  The weather didn’t allow a complete  tour but we feel we will come back for more.

Bandelier is a large ancestral Puebloan site settled by folks migrating from Chaco Canyon and Mesa Verde.  It was inhabited from around 1150 to 1550.  The many Pueblos around Sante Fe claim to be descendents of these people and still have ceremonies in the park.  Whats unique about Bandelier is the mix of large multi story  circular buildings with courtyards (as seen at Chaco) combined with cliff alcove and cave dwellings similar to Mesa Verde.  A mix of simple and very complex building styles.  There are more than 3000 documented sites just in this park.  Settlements grew from one or two families in the early period to large villages of up to 600 rooms.  The rugged landscape of mesas and canyons and volcanic rock also adds to the appeal.  Great hiking, replica ladders to climb, petroglyphs, odd rock formations all add to the appeal for us.

We’ll add Bandelier to our favorite ancestral Puebloan sites in the Southwest.  Some of others include Mesa Verde, Chaco Canyon, Hovenweep, Chimney Rock and Canyon de Chelly.  These are some of the thousands of sites reminding us of the large population who once thrived here.