Alaska and Hawaii were two of our first goals after deciding to go full time in the RV. We thought “why not knock these two off the to-do list in 2015”. A great way to start the full time lifestyle, living without the burden of a house.

We decided to fly from Oakland California to Honolulu, spend a few days, then take a Norwegian Cruise Line “Pride of America” 7 day cruise. This is the only cruise ship that visits 4 ports on 3 islands over 6 days. We would have 2 days in Maui, 2 days in Kuaui and 2 different ports on the big island Hawaii. We thought it would be a great sampler tour since we had never been before. Our friends from Pine Island, Sharon and Mike, decided to join us.
We read some history and guidebooks before the trip so we had an idea what we wanted to do. We flew Hawaiian Airlines on a wide body plane, the service was great. They even provided a meal!!!

Honolulu immediately impressed with the traffic congestion. We had heard it was bad and it is. But it is a beautiful setting for a city. Tradewinds diminish the affect of the humidity and the temperature was a comfortably warm 80 degrees. Could this be paradise?  Our AirBnB room was as advertised on a hill above the city. Our hosts, Robert and Beverly were very welcoming.

We met Sharon and Mike the next morning and set off for Pearl Harbor, the most visited site in Hawaii.  We took the boat to the Arizona Memorial and visited 2 of the museums telling the story.  The memorial is right over the rusting hulk of the ship where it sank.  1177 people doomed inside.  Oil still seeps slowly to the surface.  Very solemn place.

Gun turret of the sunken ship

Rather than sit in traffic back in Honolulu, we continued into the back country of Oahu headed for the fabled North Shore.  The waves are truly incredible and the surfers are there.  We couldn’t get to the bonzai pipeline as the World Cup Surfing Championships were being held and the place was all roped off.  We did get off to some beautiful beaches with gorgeous mountain backdrops.  We wound up circling Oahu before heading back to Honolulu. 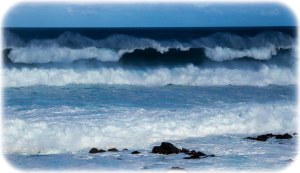 Look Out behind us! 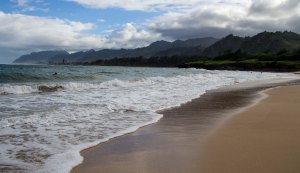 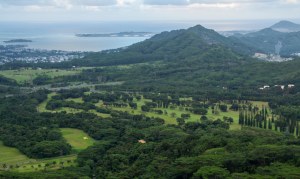 The next day we toured the Iolani Palace, the only former royal palace on American soil.  Of course, history will show it was stolen from the Hawaiian people.  It is a beautiful building and a story of a wonderful royal family.  Very artistic, very happy and very caring of the people.  Unfortunately they ran afoul of some American businessmen and lost their country.  We also hiked to the top of Diamond Head, the big rock overlooking Waikiki Beach. Short, steep hike with great views.

Overall, we felt the over-development of Honolulu made this place un-interesting but it is still a beautiful paradise of an island, can’t wait to see more.

This entry was posted in Cruises, Hawaii. Bookmark the permalink.