Our cruise adventure on Celebrity Solstice continued to New Zealand.  Heading south and east from Melbourne we entered the area of the Pacific Ocean known as the Roaring Forties.  This area is known for near constant high winds, rough seas and frequent storms.  We did not hit any storms but the seas were awesome and winds strong.  Many times the outside decks were closed to passengers.  This was our first cruise on Celebrity and we were excited to experience the difference.  Celebrity is known for upscale cuisine and live glass blowing shows on the top deck.

Our first New Zealand stop was not a stop at all but a series of sounds, Milford Sound, Doubtful Sound and Dusky Sound.  Milford is really a fjord cutting into the rugged mountains of southwest New Zealand.  It was cold and raining as we cruised the sound.  Because of the rain we saw countless waterfalls.  When it was time to turn around and exit the captain did donuts with the gigantic ship affording great views and cheers from the passengers.  Doubtful Sound later the same day gave us better weather so we got some decent photos.  Dusky Sound was our last sound transit and as we exited we were at the south end of New Zealand’s South Island. 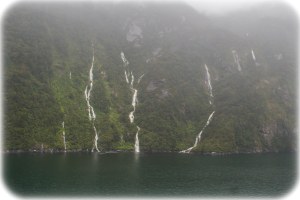 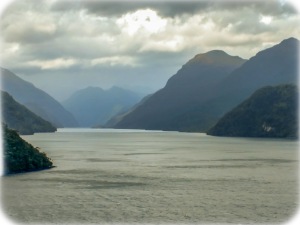 Dunedin was our first port in New Zealand.  The welcome was so genuine and people so friendly we immediately loved the place.  Here we took an off ship tour to the gingerbread train station and rode the Taieri Gorge train across the countryside.  We also saw much of the beautiful surrounding area.  Dunedin is a lovely city and very livable. 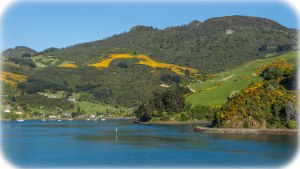 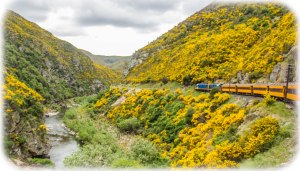 Next stop was Akaroa.  Cruise ships used to dock at Christchurch but since the 2011 earthquake rebuilding has been slow.  This was a tender port, meaning we had to transfer from ship to port via tender boat.  The first Europeans here were the French but the British soon took over.  Here we booked a ship tour on the TranzAlpine Express rail journey across the vast Canterbury plain to the snow covered Southern Alps.  It is New Zealand’s most scenic rail journey.  Of course any visit to New Zealand would have to include a sheep shearing demo. 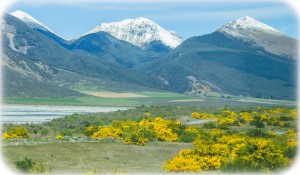 Back to the coast

Windy Wellington is the capital of New Zealand and located at the south end of the North Island.  Its the southernmost capital and windiest city in the world.  It is also in a seismicly active area even for New Zealand.  Here we decided to tour on our own and had a great time.  Once again the locals were super nice and friendly.  A shuttle was provided from the port to the new visitors center in town (the last was destroyed in a 2016 earthquake).  There we found a free shuttle to the Zealandia Nature Park.  This park is really unique in that it seeks to eliminate all invasive plant and animals and eventually restore the natives in their normal balance.  This is a long term project but already many endangered birds are flourishing again.  We saw the native Tui and Kaka birds.  From there we caught another shuttle to the botanical garden and cable car.  Wellington is a very livable city and we found it very doable on our own.  We spent NZ$34 or about US$25 for the same sights the ships tour would have cost us US$218.  Wow! 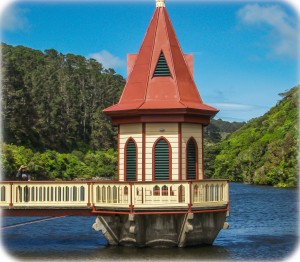 Looking down on tree ferns 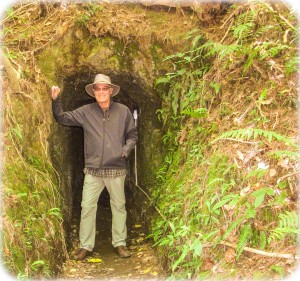 Old parliment – can you believe its built of wood 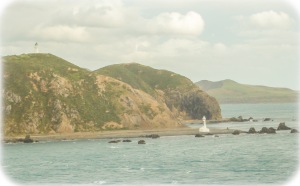 Tauranga is a holiday area for New Zealanders.  It is located in the Bay of Plenty region near Mount Maunganui towards the north (warmer)end of the North Island.  This is an area of active seismic and hot springs activity.  We toured the Whakarewarewa Living Maori Village built on hot springs and mud pools that reminded us of Yellowstone.  We learned how they cook and bathe using the hot springs on a daily basis.  The Moari are the oldest inhabitants of New Zealand, migrating from Polynesia.  We then drove around Lake Rotorua and visited the Polynesian Spa, a world famous hot springs.  There we soaked in 7 different pools of varying temperatures with great views.  We also visited a Kiwi farm and tasted the Gold Kiwi which is much sweeter than the familiar green.   This was another off ship tour and we enjoyed the small van experience.  If we go back to New Zealand, Tauranga would be a focal point of our visit. 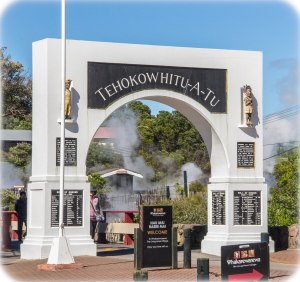 The Bay of Islands is really an area more than a place.  It is a very historic area where the town of Russell was the first capital of New Zealand and where the Waitangi Treaty was signed in 1840 signaling peace between the British and the Maori.  The date of the treaty is celebrated each February as the founding of New Zealand.  Russell was once a very busy whaling port.  Here we toured on our own again traveling on the local ferry.  Today it is known for great fishing and beaches. 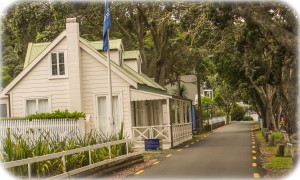 Our cruise ended in Auckland, New Zealand’s largest city.  We self checked out of the ship and took a prebooked tour of the volcanos of Auckland.  It was another small van tour with a young entrepreneur guide along with a couple from Florida embarking on the ship we just left and 2 young women from Germany who were working in Auckland as au pairs.  Auckland is geologically amazing.  There are 53 volcanos around the city.  Rangitoto is the largest and most recent eruption (600 years ago) and while the volcanic field is considered dormant, a new one could pop up anywhere.  Eruptions are never in the same place twice. 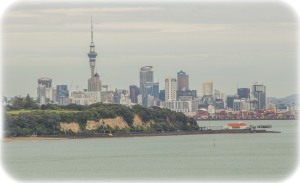 Walking in a volcano

New Zealand is a wonderful country.  There are still more sheep than people.  The people are friendly, the scenery is spectacular, the climate mild.  We would definitely love to return for a more in depth tour.