After our big cruise adventures we returned to Washington to spend time with family before heading south to warmer, drier climes.  We celebrated Thanksgiving and Christmas together on our own timetable. 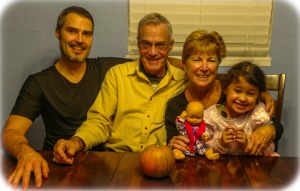 We usually get our RV maintenance done in Oregon in part because there is no sales tax.  A bigger reason is that we’ve found Elite RV Restoration and Repair to be the most competant RV technicians we’ve met.  They have the highest hourly rate but lower cost repairs because they know what they are doing.  We had accumulated a pretty good list of mostly small repairs in the year since we’d seen them last.  Down the road we had our diesel engine and generator serviced by Cummins in Medford OR.  We took the time while there to tour the factory where Randy’s Micro-Trains are manufactured.  It was an interesting tour of how modern factories work with 3D printing and computer controlled machines but it was also amazing how each tiny model train car is assembled by hand.  Impressive.

Our travels south took us to California a little later than usual.  Surprisingly the weather was very pleasant in the Redding area.  Redding is a very nice smallish city with a great network of walking trails and an iconic pedestrian bridge over the Sacramento River. 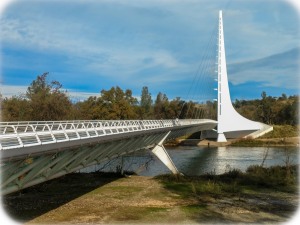 Pinnacles National Park has become a favorite stop as we travel south through central California.  Great hiking and caves.   We also love visiting Monterey Bay at Moss Landing.  There we watch sea lions, seals, otters and many seabirds and hike on the beach. 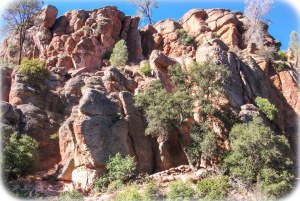 Moss Landing with seals and birds

Just east across the mountains from LA we stayed at Soledad Canyon RV Park.  Its a nice rural area.  Nearby we love hiking Vasquez Rocks.  Its  a Los Angles County park and scene of many Hollywood films and TV shows.  Great hiking in a desert setting.

We love this place

Our final stop in California in 2017 was Palm Springs.  Warm and dry, its a hikers dream in December.  Cool nights balance it out.  At Coachella Valley Preserve we hiked to Hidden Palms and Willis Palms.   Joshua Tree National Park gave us a chance to hike the Lost Horse Mine trail, visit the Ryan Ranch ruins and Cholla Cactus Garden.  All great desert hiking. 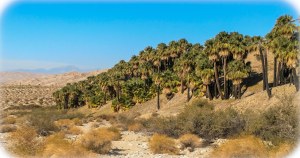 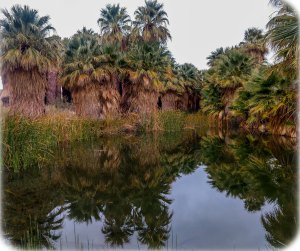 To end the year we traveled across the southern tier of the US to Florida.  We hit the road  before Christmas and used the Escapees Days End Directory to find free boondocking sites across Arizona.  We stayed on BLM land near Tonopah AZ.  It was very quiet with beautiful mountain views and just enough neighbors to feel comfortable.

Then we went to Tucson and stayed at the very popular boondocking location known as Snyder Hill.  We had a couple cool days and cooler nights there.  We were surprised to find that we were very close to the Arizona Desert – Sonora Museum.  We have learned to love the desert and this park was part zoo, part botanical garden and very well done.  They had a free flight raptor show where we saw a Peregrine Falcon, Barn Owl, Gray Hawk and 4 Harris Hawks – the only hawks that hunt as a group like wolves.  All the birds were rescued and flew free demonstrating unique behaviors.  We loved it! 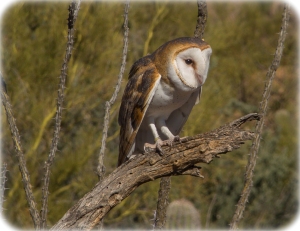 Along the same south Tucson road we also visited the Old Tucson Studios, a genuine Western movie set where 1oos of movies and TV shows were filmed.  Begun in 1939, the studio was built for the movie “Arizona”.  It’s a classic western town with real adobe bricks and iconic designs.  At its peak it was the Hollywood of the Desert.  “Three Amigos”, “Tombstone”, John Wayne’s “Rio Bravo”, Paul Newman’s “Hombre”, Clint Eastwood’s “Outlaw Josey Wales” and TV shows like “Gunsmoke” and “Little House on the Prairie” and many more were filmed Old Tucson Studios.  Its a theme park today with guided tours, a train ride and performances by actors.  Another great day. 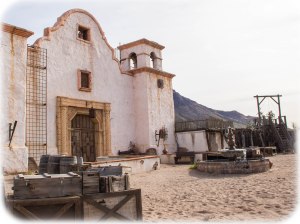 Then it was on to a cold night at the Willcox AZ visitors center.  Apple Annie’s next door had a great apple raspberry pie.  On our way to our next stop we visited Silver City New Mexico.  On our cross country treks we often visited The Pink Store in Palomas Mexico just across the border from Columbus NM.  While trying to find out if they would be open on Christmas Eve we found they had opened a second store in Silver City.  While the store was much smaller we bought some beautiful pottery for the patio we don’t have.  We also had a great lunch at Diane’s in Silver City.  That night was spent at the Escapees RV park in Deming NM.  50 amps and water and sewer were appreciated.

I-10 in Texas is 890 miles long and we traveled all of it.  We stopped in Van Horn, Sonora and the Thousand Trails RV Park in Conroe.  Then it was time for the last 1000 miles to Clermont Florida – our home for most of January.  Surprisingly we experienced some of our coldest weather in Florida.  Parts of I-10 near Tallahassee were closed due to ice and some places had snow but we missed all that.